This Web site would of course not be complete without the following images, after all it is now Politically Correct to provide for Feline Equality in todays' society!

Currently, we have no cats with us, Snoopy, who was 18 years old, saw many years; this has been a real home for a number of our four-pawed friends, colleagues and comrades; they were a full member of the family.

Here follow just a few images of these furry companions: Firstly the last cats I had in the U.K. before departing for the Netherlands (from 1979), and they are Sara (black-and-white female, Quicky I (kitten) and the father Dinky II (a ginger tom):- 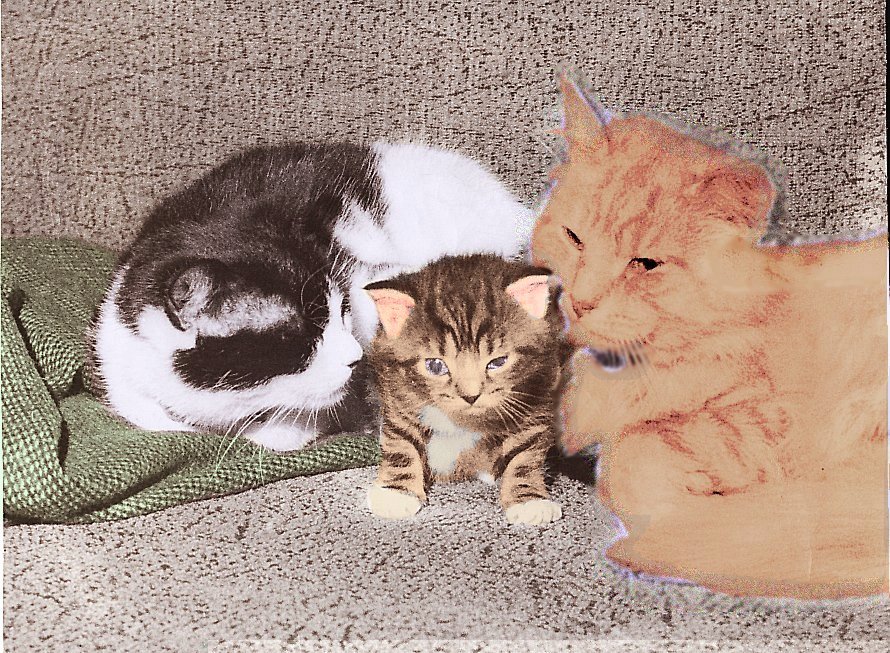 Next was Rakka ('Mischief' in Dutch, and he was that indeed) who was a real comrade to me for 18+ years and over three moves:- 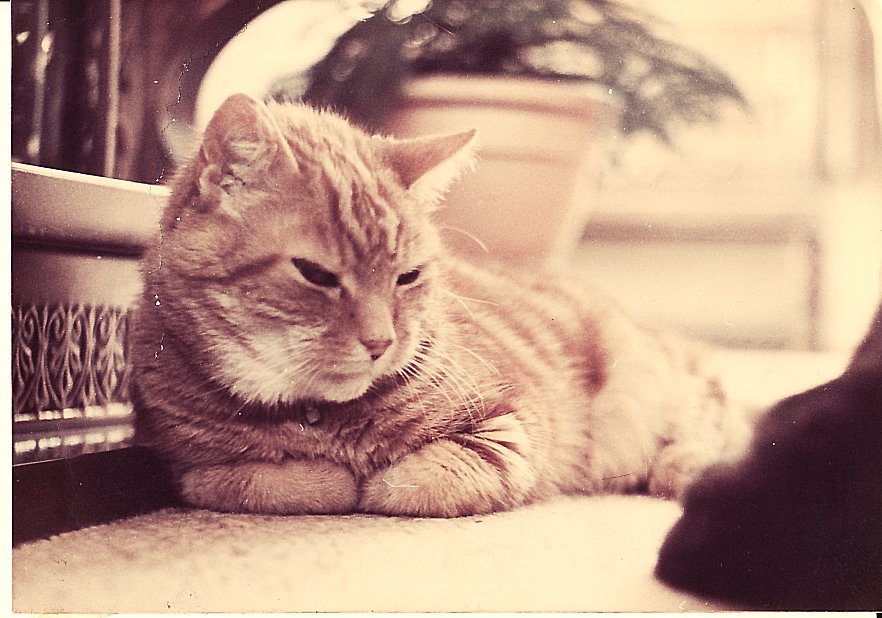 Then there was Princess, a right royal feline who did as she pleased, which was as little as she had to! :- 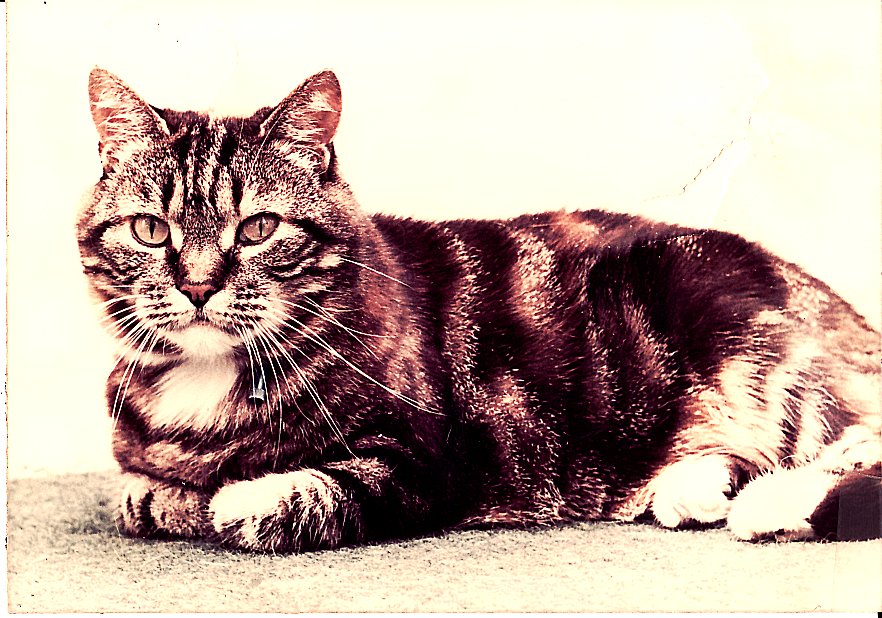 She and Rakka took to the next, Quickie, very easily (from an old b+w photo):- 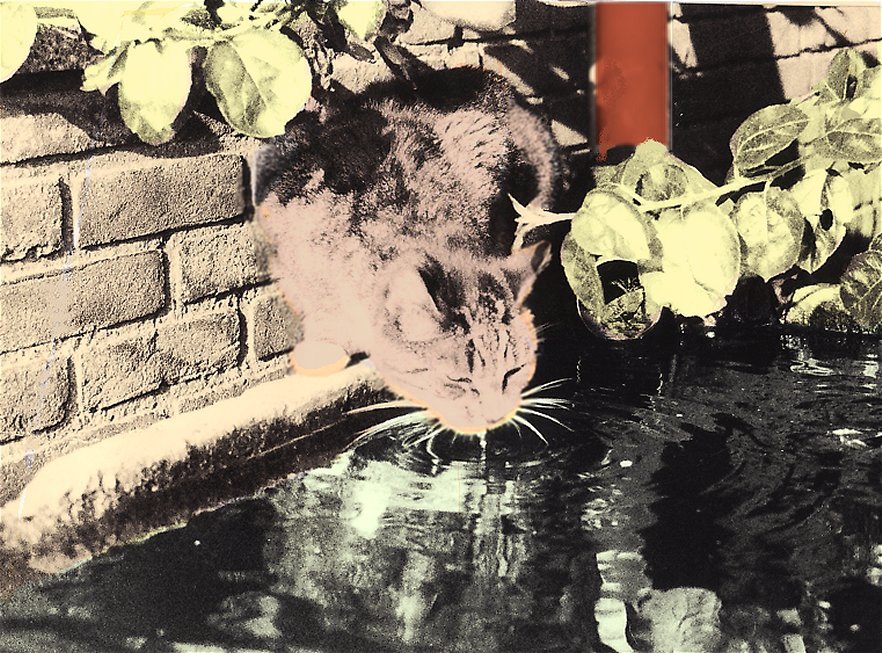 Then along came Vlekkie, a smaller but very active puss who even 'saw off' next-door's dog when it wandered into her area of the garden! :- 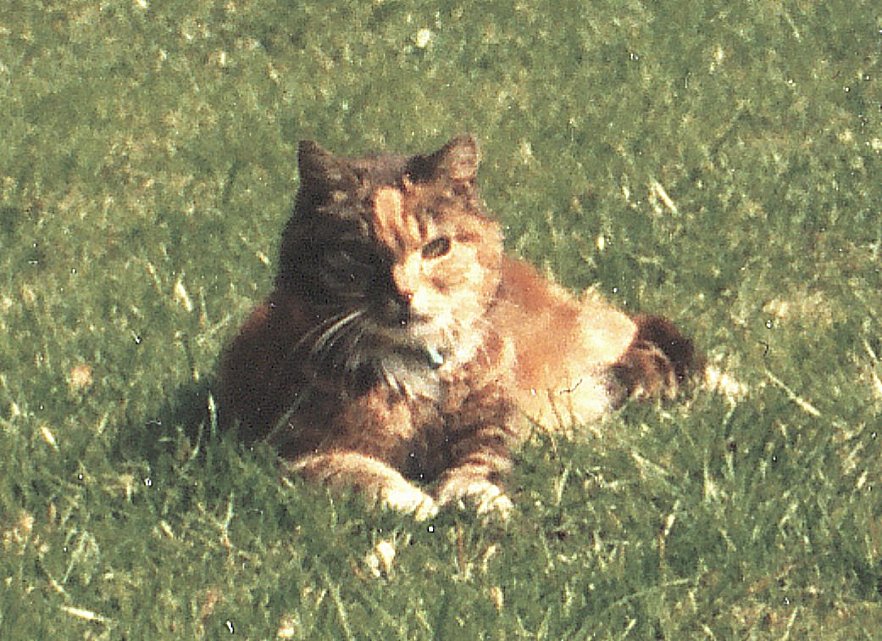 Snoopy, aptly-named since she was always a bit of a detective cat, joined us and saw and got to know many of our other cats:- 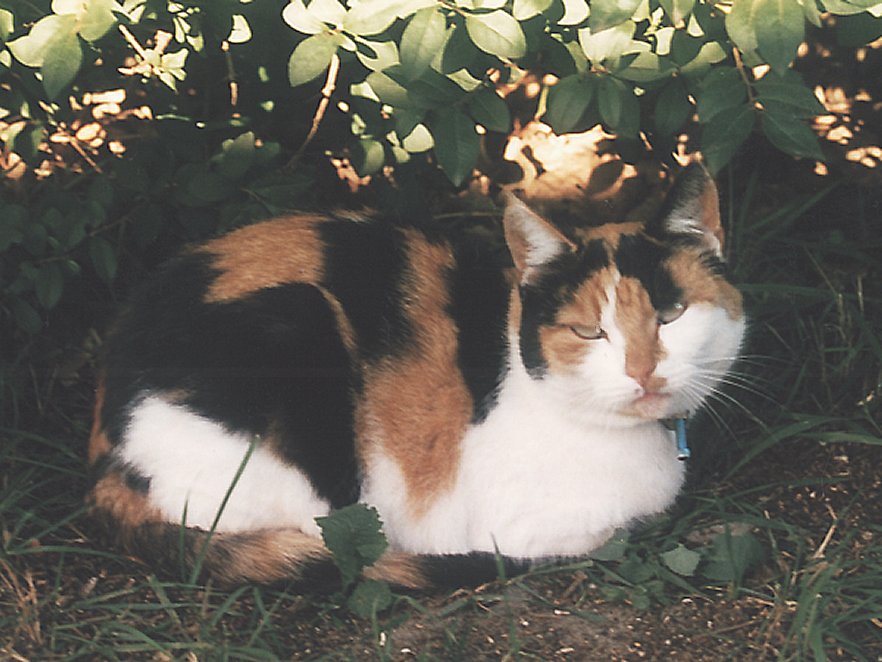 The two cats Moortje (black tom) and Minute (black-and-white tom) were as inseparable as brothers, playing with each other and sharing their basket together all the time. Moortje was the more adventurous, but unfortunately less intelligent for he made a dive across the road when he really shouldn't have. Minute used to wander into the field across the road and run along with the sheep grazing there! :- 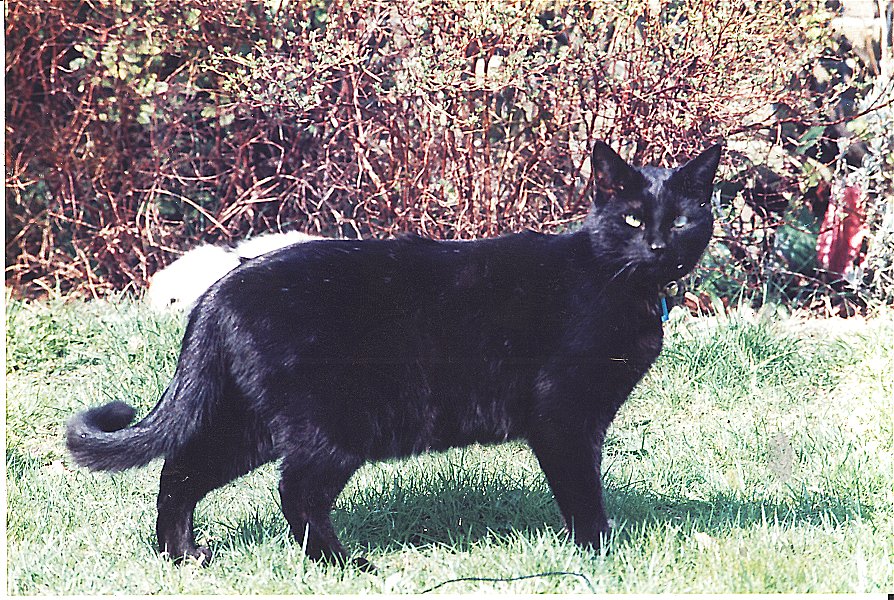 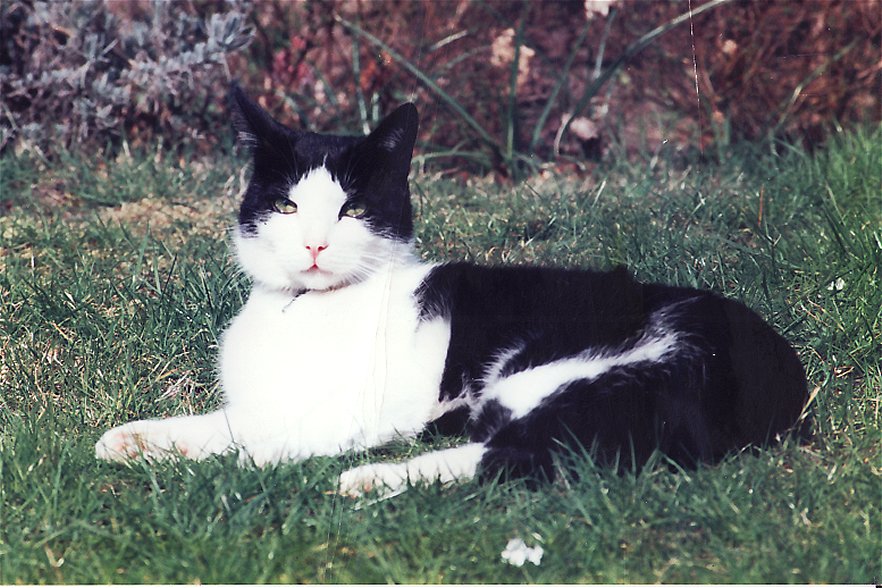 We then took on Trinket, who hadn't had a great life at first but really enjoyed herself and finally felt really at home here:- 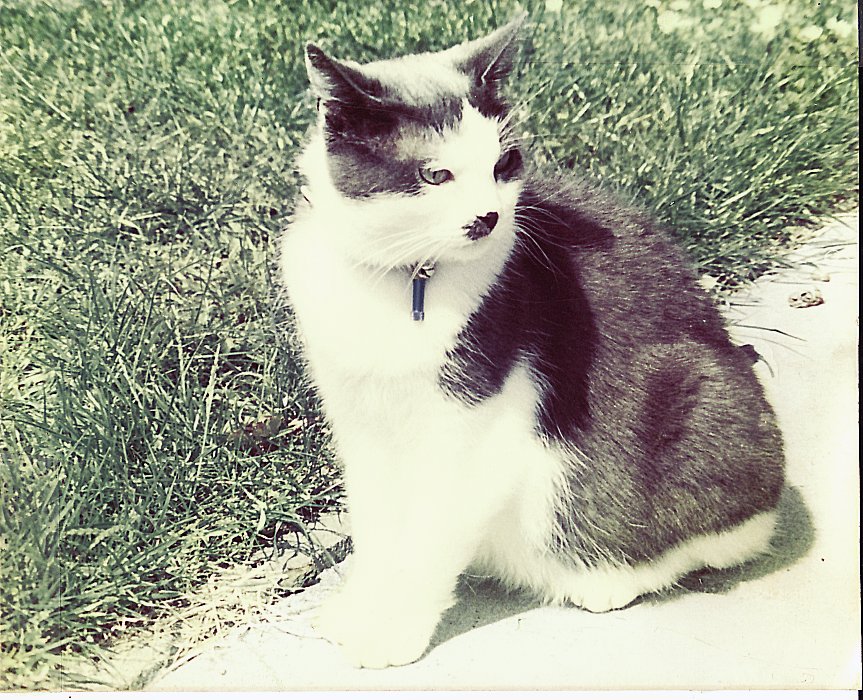 The cat that stole my wifes' heart was Pushy, who also found the real comfort of a nice home with us, and most certainly was 'pushy', with all the fuss and attention wanted:- 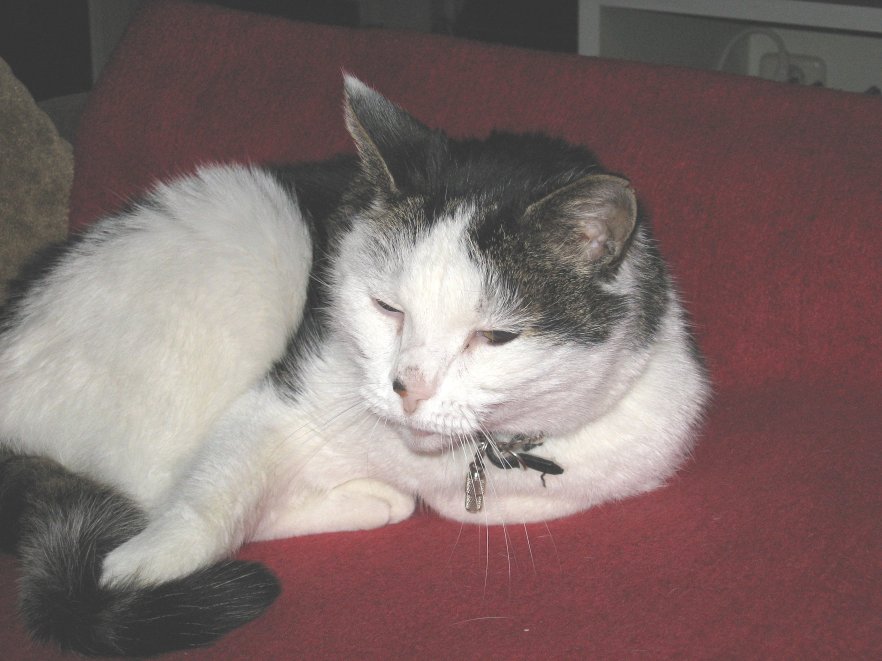 Along the way, various things happenned with the furry folks, and later on I'll put a few more images of that on this page. Just now, as we have a "non-standard" cat door from the conservatory to outside (in an attempt to make it difficult for 'immigrants' to cross our 'borders'!), and of course the cats have to learn how to use it. So here's the two 'brothers' having an inspection of the door in question:- 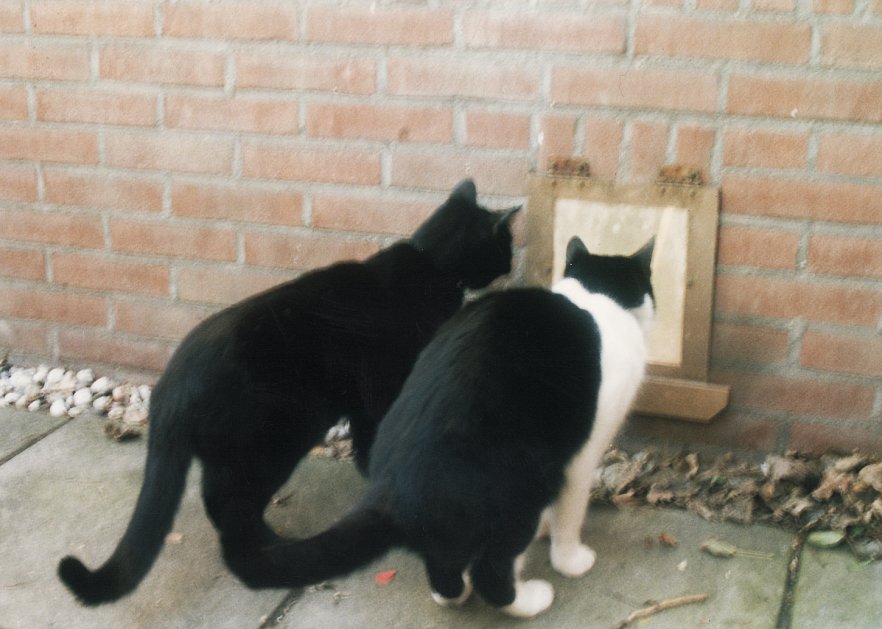 Sometimes you just need that vacation, to roll about in the sun and to show off your agility:- 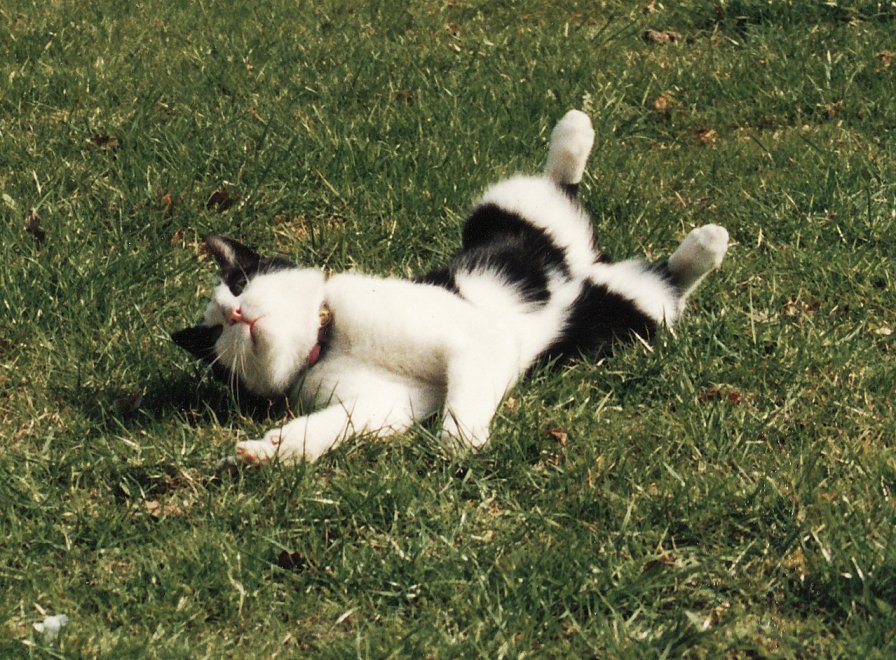 Acting as the traffic controller in the catwalk is, on the other hand, work - but also interesting as you never know what might appear:- 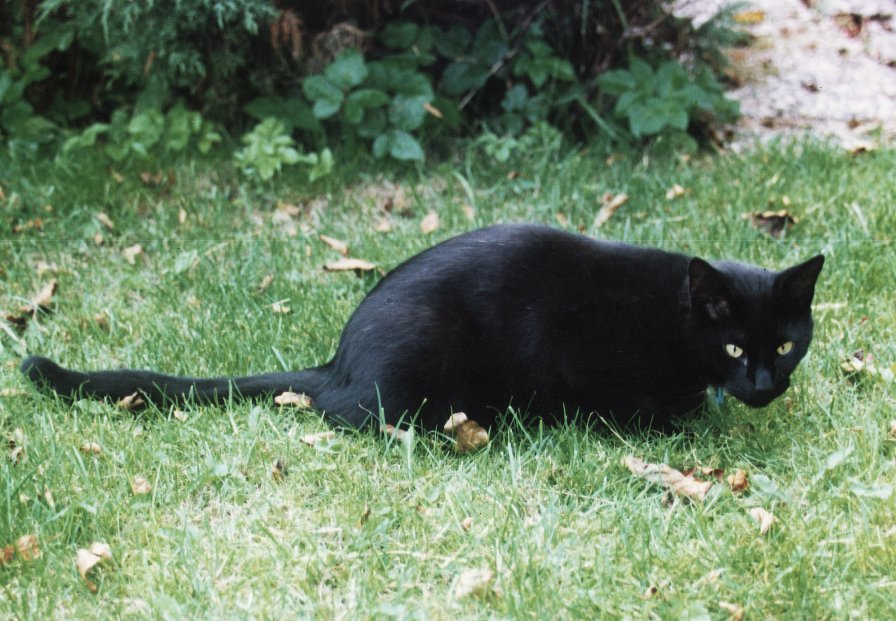 Sometimes it's just time to make sure your place in the garden is yours and yours only, as shown here by Trinket:- 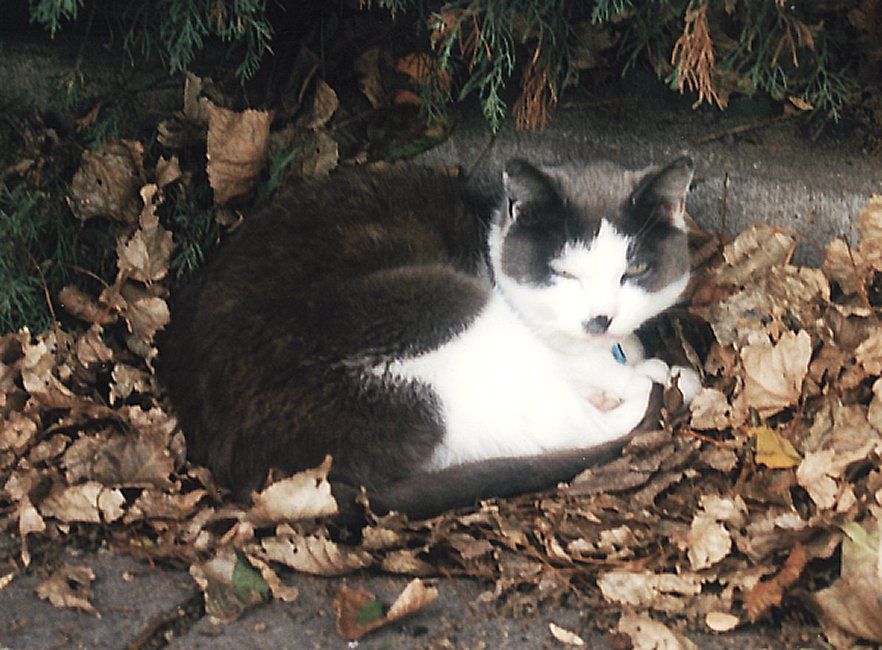 You can E-mail the author of these pages (Trevor Gale) by using this link, or by sending mail to tgale@trevang.com on the Dutch Internet service provider XS4ALL.