It was here after moving to the Netherlands ('Holland')that I was given the opportunity of working with the European Space Agencys' Technical Research centre 'ESTEC' in Noordwijk, very near where I live now. That proved to be the best step I could ever have taken, it has provided me with steep challenges to overcome in some very different working environments, including notably involvement in the GIOTTO mission to fly by the comet Halley (it did so in 1986 and even survived to do further work) and to take part in early European parabolic test-flights, in which during one flight one experiences some 30 'parabolae', each one starting with 2G (twice gravity, so twice your own weight!), then zero-G (as in space, weightless), followed by another 2G phase and a return to 'normal' 1G until the start of the next parabola. I'm not sure how many such flights I did, but it was quite a lot and it was very hard work even though at the same time a very satisfying feeling. I was one of the lucky ones in that I never got sick, like in sea-sickness, something I have not experienced even when performing work during the 2G phases. As an indication of the period of zero-G and the before-and-after 2-G periods, here's a shot of the accelerometer reading for one parabola:- 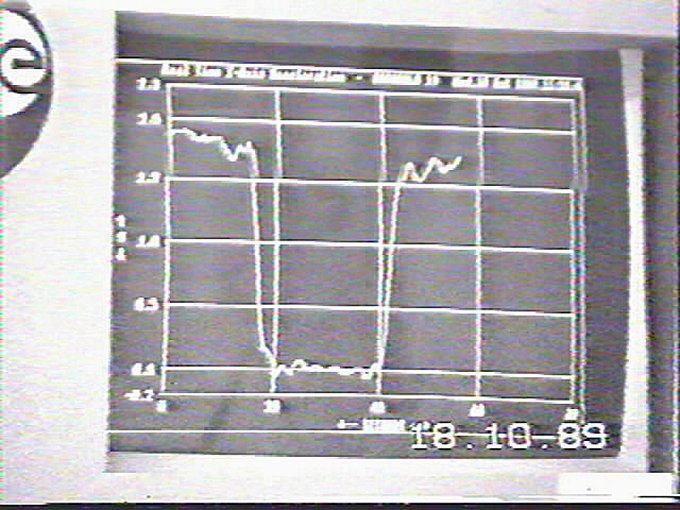 Some photographs of the flights follow here - and some short video clips which you may select by clicking on the links below:- Note the video clips are big files, some 3Mbytes, but with a reasonable connect that shouldn't be a problem.

For information, 'inject' means the injection into the zero-gravity phase, and 'recovery' means the going back into 2-G after a parabola... First, a very important experiment of mine was into how to handle a smokers' pipe in zero-G - (click here to view) that was actually done in 'spare time' during one of the parabolae.

Then there's a clip of someones' effort at 'dancing' in zero-G (click here to view this one) which again was done in spare time.

Finally there's a cockpit intrument view(click here to view it, in black-and-white) showing especially the rate of climb and descent during one parabola (top right instrument).

Now some shots: first an example of how to get from one experiment to another in zero-G:- 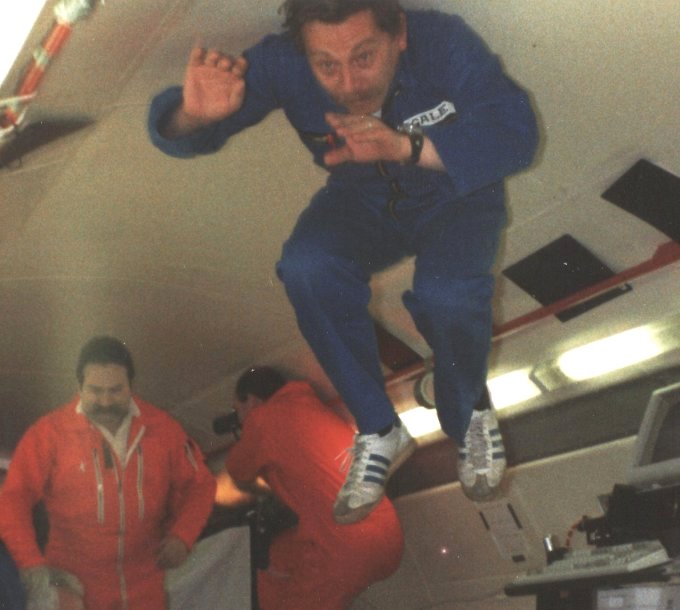 Now working in such a flight means 'catching a drink' now and again:- 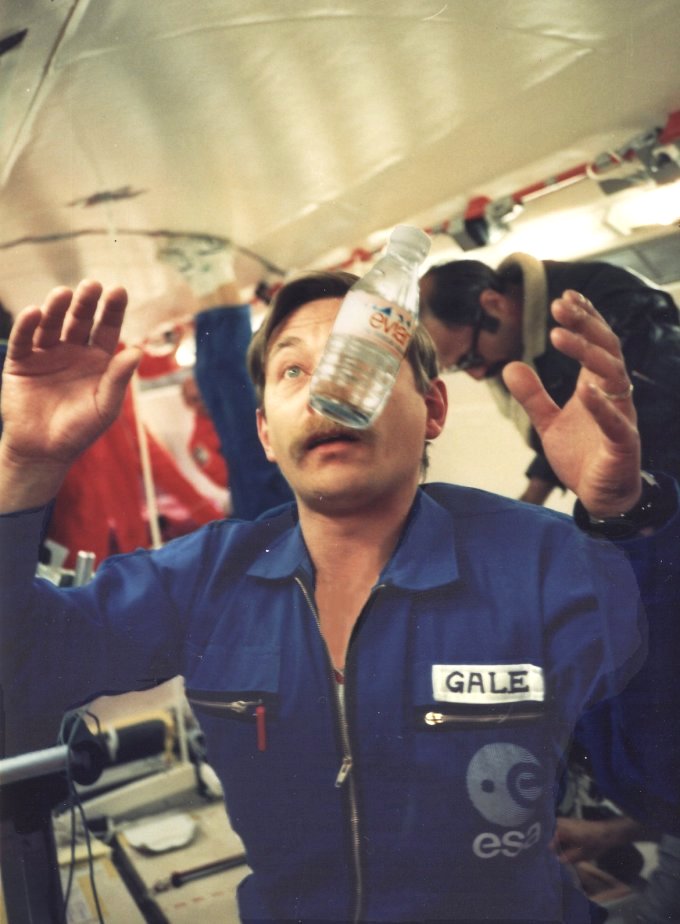 For the sake of science, sometimes I lent my services as a 'guinea-pig', and here I'm being marked up not for a crash but for seing how certain movements are made during zero-G efforts:- 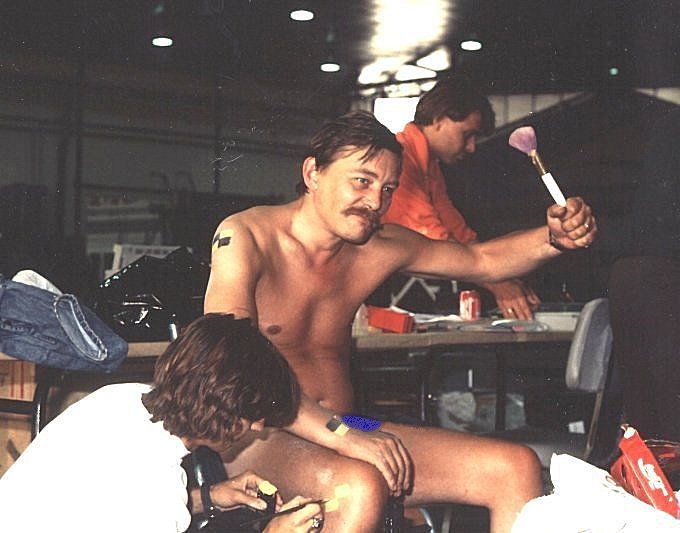 Of course, each and every experiment demands the participation of a small team working closely together, so here's the group for one of them:- 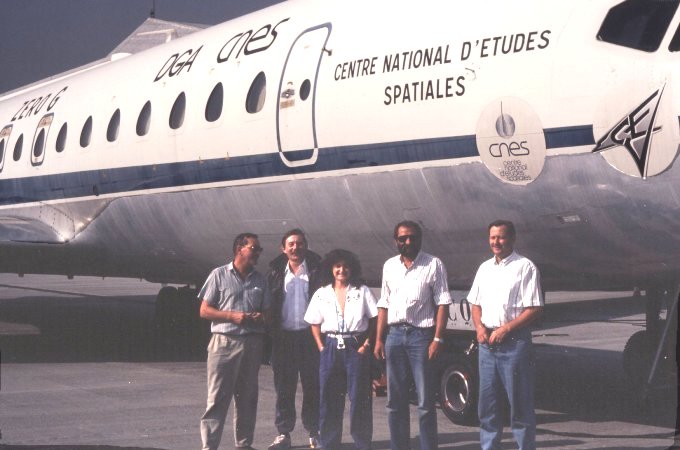 Here is a closer view of the team:- 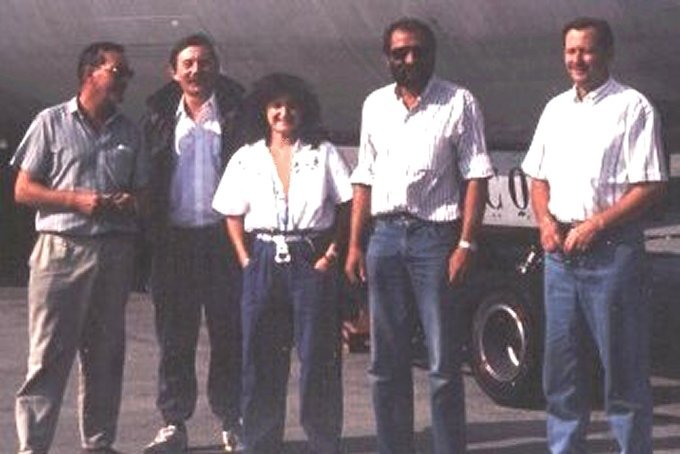 I have also been involved in making DAB measurements from a simulated satellite platform, using an adapted helicopter, co-authoring a feasibility study into the use of DAB from satellte in urban built-up areas and in open, rural areas which may include those encountered in what we tend to call 'the third world', or developing countries for applications such as education and medical advice.

Although I made a career out of professional electronics, I am still actively interested in radio electronics, especially receiver techniques, and I have here at home my own electronics workshop where I am often to be found working until strange hours - I mostly generate my best ideas (also for other interests) between around 10:00PM to 02:30AM ! Below you can see firstly the entrance to all my 'places':- 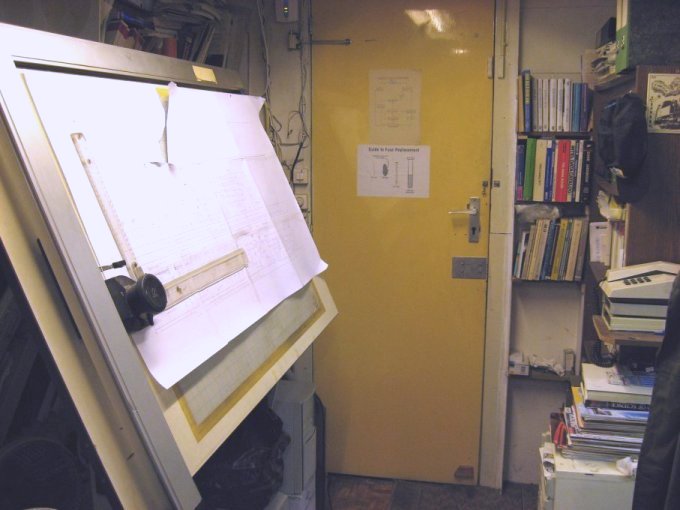 ...and me at one of my workbenches in the workshop itself:- 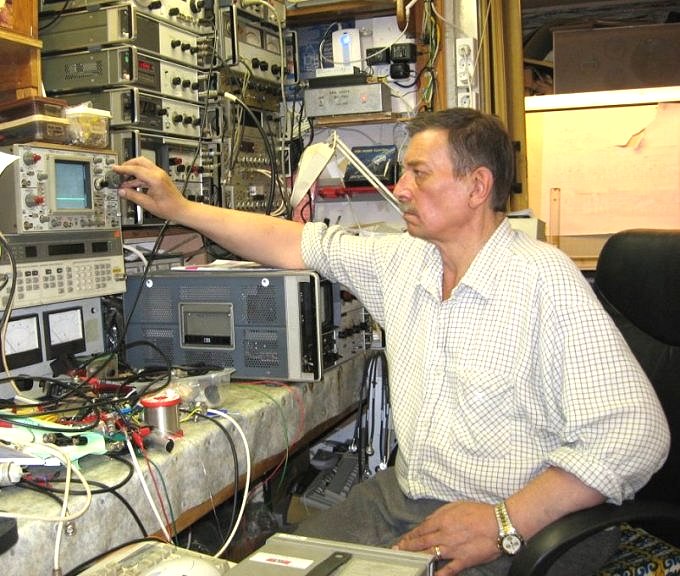 which was posed but you can get the general view or idea. Following are a couple of other views of my workshop:- 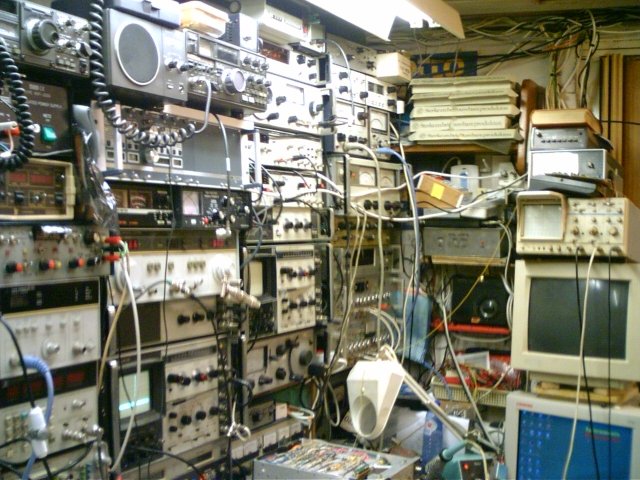 and some of my equipment:- 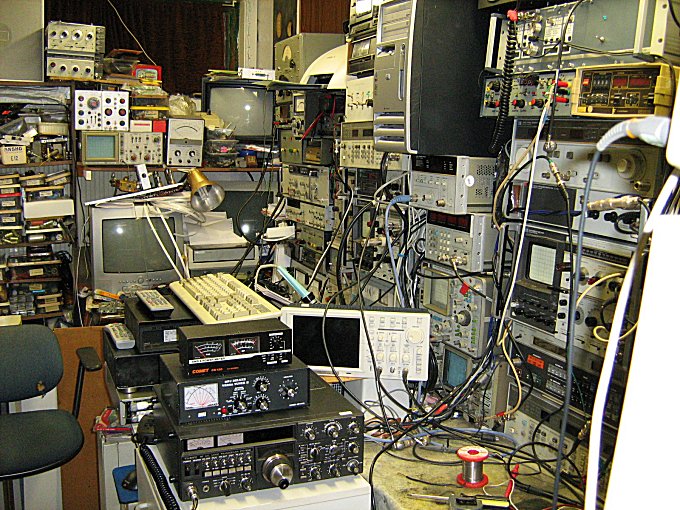 I also like to be able to manufacture what I need for things like antennas, and various couplings and so on, and to this end I also have a mechanical area in my workshop which has an old Myford lathe which is much older than I am and which I have re-furbished and made a lot of tooling for - you can see me typicaly working at the lathe here:- 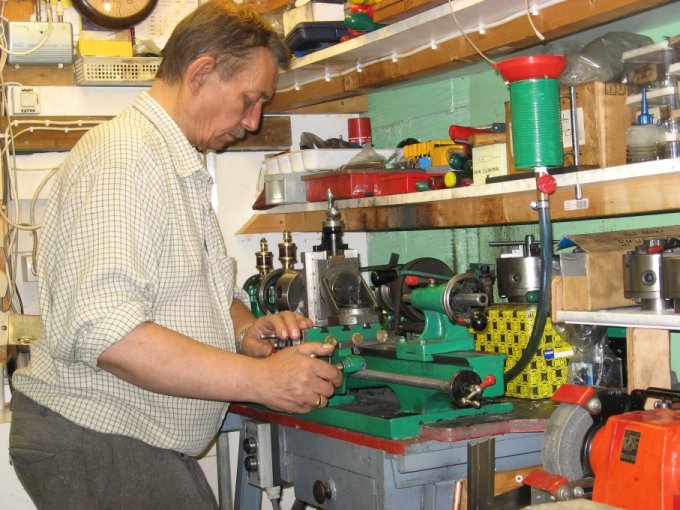 Below you can see the mess produced by working cast-iron, in this case for a chuck backplate, so you can see it does actually get used:- 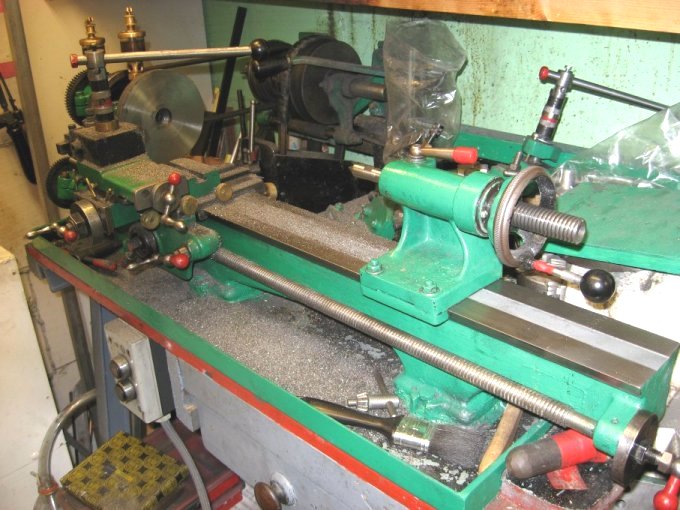 In amongst there I also have the usual vertical bench drill, tool grinder, and a lot of spares, metal stock of various types and sizes and screws etc. The lathe itself you can see a (cleaner!) view of below:- 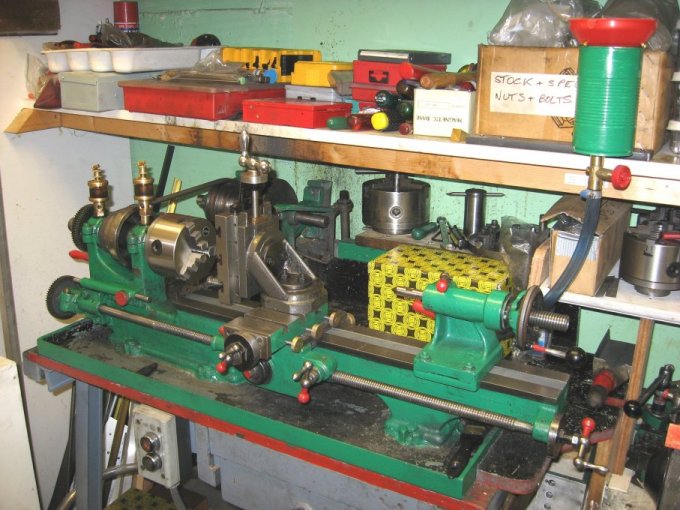 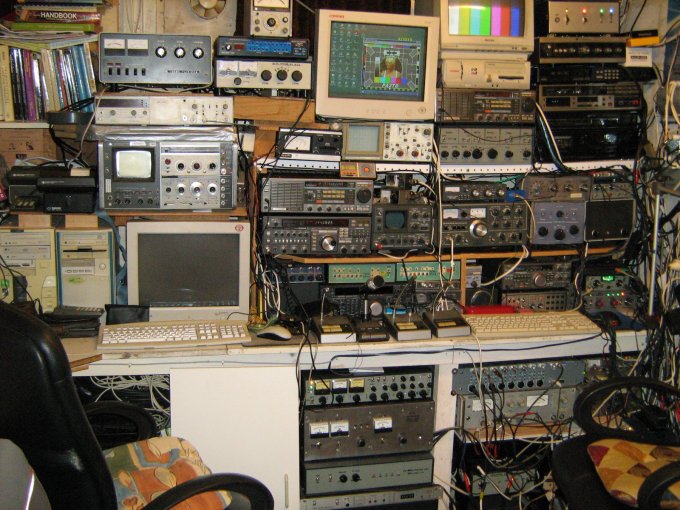 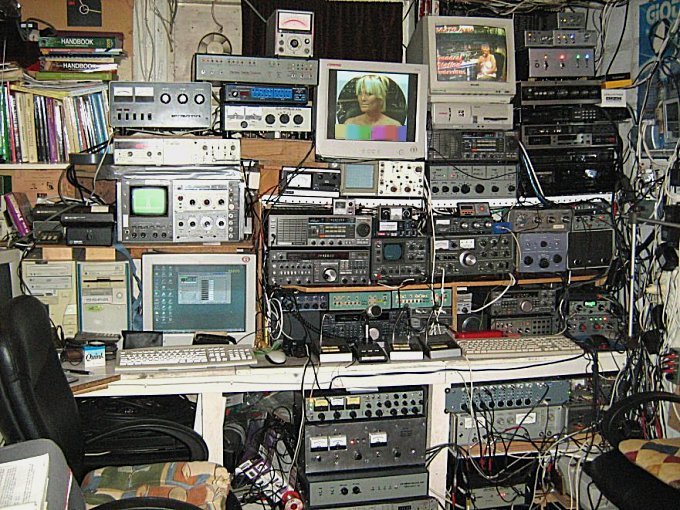 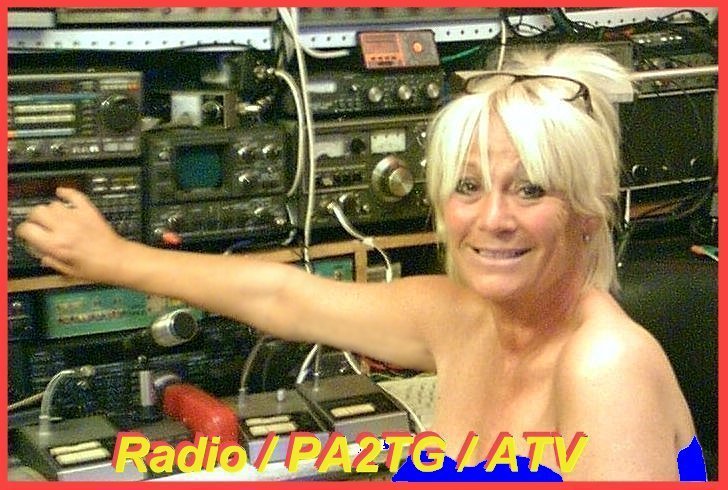 Image transmission in the form of ATV and SSTV is one of the aspects of communication that interests me, and therefore form part of the radio station. There is now an image update page under this link with current image communication status uplinks. This is in the early stages yet, but will evolve... when I get around to writing the necessary software!

Of course this requiers the use of various antennas, and a couple of views of these can be seen below. Firstly, an overall image of the rotatable Yagi's for 50MHz, 144MHz, 432MHz and 1296MHz, together with, on the right, two vertical omni-directional monitor antennas for 144MHz / VHF and 432MHz / UHF, both broadband. Thw two dish antennas can also be seen, one is for satellite-TV monitoring which mainly checks the functionality of the 1 - 2GHz FM TV receiver and the second, as yet not aligned, is for 3cm (10GHz) band use, including amateur television:- 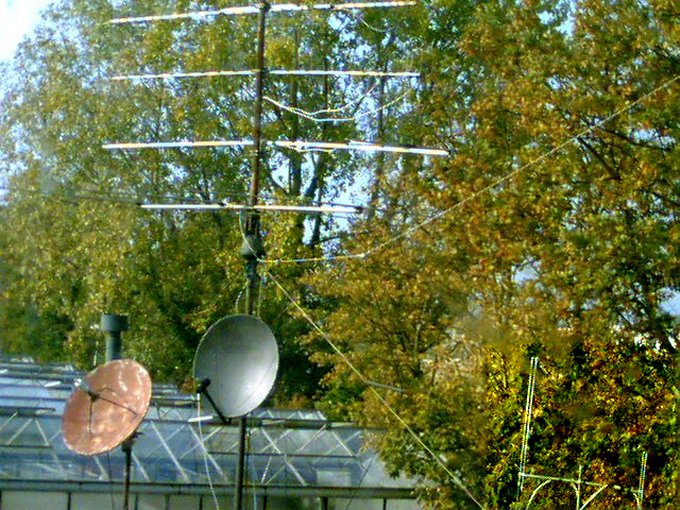 A more close-up view of the rotatable stack is below:- 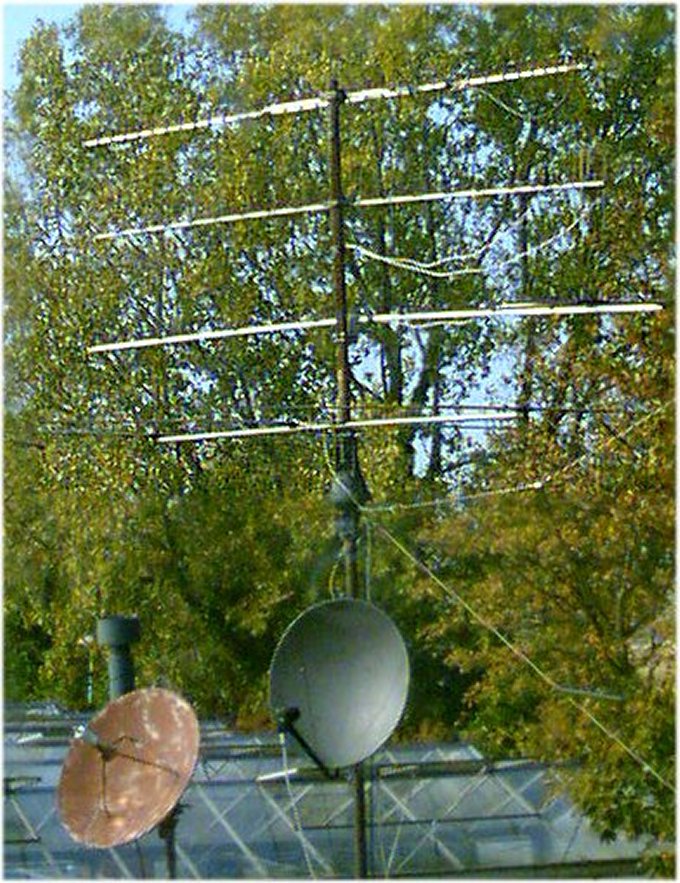 Of course, a lot of my activities, especially the technical ones, require the use of computers, so I have a number of machines - quite a lot, in fact - for software development, for hardware development, for various peripheral control, for my amateur radio station, for Video/Audio production, and for the desktop, administration and archiving requirements; these are all networked via a central network shelf full of equipment as is a computer that makes up the 'intranet' internal server. Here I am at a desktop machine in the computer area:- 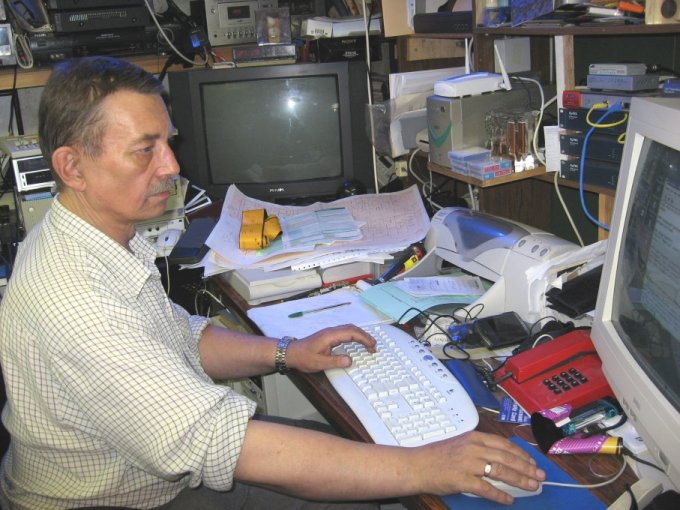 where I use Linux (Fedora Core) for normal desktop use, for the intranet server machine, for the second backup machine and for one of the software development machines. I also maintain and admin the network using a Linux machine as well. Other machines, such as that for chop-programming and certain hardware control uses microsoft Windows, promarily because there are no Linux drivers available for their associated peripherals.

An updated handy reference (toung-in-cheek) to all the insides of a computer, detailed, is available now for amusement 8*). Obviously, I know nothing about real computers and I deny all knowledge of anything to do with them.

If you happen to be interested, involved or work at electronics design, development or repair or simply have it as a hobby, you may be interested in the Chip Directory which is residing with a fellow ISP client: this useful resource can be jumped to by selecting this link. It has an enourmous amount of useful information about many devices, both new and old.

Various well-known FTP archive sites abound on the Internet, and one of the most useful I have found is the FUNET archive and this can be found by clicking here .

A lot of useful and topical information concering the IT / ICT business can be found on the Internet, but often by it's very nature out-of-date. One site which is of good relevance is to be found at this useful link which gives very useful and timely information to IT people and also anyone else who is concerned with the state of ICT including the latest legal news and virus warnings: well-worth checking back to now and again even if you're not in the IT/ICT field.

You can E-mail the author of these pages (Trevor Gale) by using this link. on the Dutch Internet service provider XS4ALL.